Game Details for A Rose in the Twilight!

With the recent release of the PlayStation®Vita and Steam® title, A Rose in the Twilight,  we'd like to showcase some basic gameplay and provide examples of the puzzles you will face in today's blog!  But before we jump right in, how about some background of the main characters? 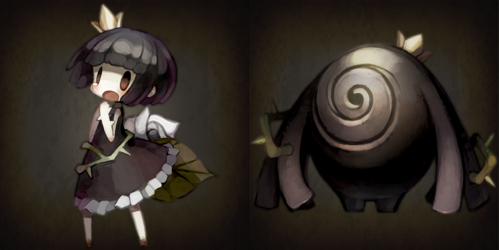 The main protagonist, Rose, wakes up in a mysterious, dark castle and notices that she has the "Curse of Thorns" on her back. Her power allows her to stop time and to absorb blood from a variety of red objects. She then comes across a creature with a huge swirl, simply referred to as the giant. As you progress through the various puzzles, you'll have to utilize Rose's abilities and the giant's unspeakable strength to escape the castle.

Sounds simple enough...right? Eh, it might be more difficult than you think, my dood.

The game will explain Rose's "Thorn Power" and how to use it to your advantage, which leads us to this GIF where you run into falling rocks. Probably not a good idea to try to gap that. Instead, use the Thorn Power to create a neat set of stairs. Rocks rock! This GIF is just a small example of what objects you can absorb blood from throughout the game.

Use Rose's "Thorn Power" to absorb blood from red-colored objects. Stairs, you say? Why certainly!

You'll be introduced to Rose's companion rightfully referred to as the giant. You'll need it to help guide Rose through various obstacles. The giant is invincible to monsters, so you can switch to it to help Rose avoid or defeat monsters, as well as activating switches that only it can reach. More importantly, the giant has an enormous amount of strength, so tossing Rose and other objects are also vital for progression.

In this GIF below, you can put Rose inside a barrel to protect herself from monsters and activate a switch to progress.  BUT, you'll need the giant's buff body to toss you over.

DO A BARREL ROLL!

Throughout the game, you'll need to use the objects around you to successfully progress through the stage. One example is the catapult. You can use the catapult to toss Rose at hard-to-reach places, or even use it as a weapon to eliminate enemies in your path.

Rose's Thorn Power does two main things: one, she can absorb and expel blood to interactable objects and two, slow down time. Timing is very important, especially when placing platforms for Rose to stand on. If you absorb blood from a platform too early, Rose may slip and fall.

Timing is crucial! Make sure you slow down time for accurate platform placement...or fall to your doom. You'll see what we mean later.

See...timing and placement are everything. Bye Rose! :(

So there you have it! Remember, these examples are just some of the obstacles you'll come across in A Rose in the Twilight. Discover how to solve each stage as you delve deeper into the story's grim origins.  A Rose in the Twilight arrives on the PlayStation®Vita in North America and Steam® on April 11 and in Europe on April 14! For more information, head to the official website!